Showing posts from January, 2019
Show all

Signs from the Women's March 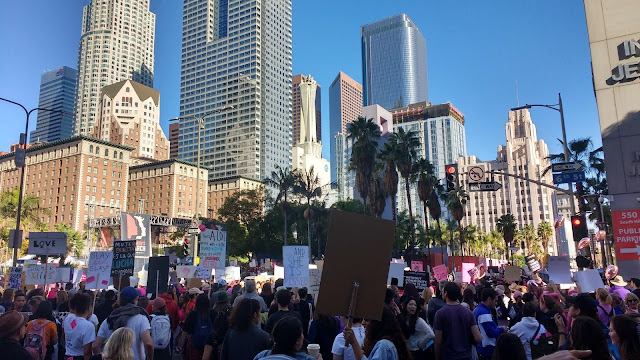 I attended the Women's March in down town LA this morning.  The biggest takeaway for me was when speakers or protesters described undocumented families facing deportation or separation as our neighbors.  As a Jew, I know that my ancestors have faced pogroms where angry mobs sought to drive them out by threatening their lives and livelihoods.  It chokes me up when I imagine people who only want an opportunity to live in peace facing that kind of hate in America, MY country.  But it's reassuring to see that as long as hundreds of thousands of people are angry enough to keep marching and agreeing to stand up and protect our neighbors, we can make a stronger and safer America. Here are a few of the signs.
Post a Comment
Read more

I'm very disappointed with Nancy Pelosi's response to the government shutdown. Obviously, I'm far more than disappointed with Donald Trump's decision to shut the government down, and I don't really like Chuck Schumer's response, either.  But I highlight Pelosi because she's the only one of these three with some influence and who isn't the person who is shutting down the government. I'm disappointed because Nancy Pelosi is doing exactly what anyone would expect her to do, which is doing nothing and letting a disaster unfold that will damage her opposition's political standing.  The problem is that this strategy makes no consideration whatsoever for thousands of people who are falling into permanent economic hardship due to this shutdown. The media has reported, it seems, thousands of times about the visitors to Joshua Tree who now have to endure visiting a national park without the reassuring knowledge that a professional park ranger is keep
Post a Comment
Read more
More posts