Happy Birthday to Me! (and Jack too, I guess)

May 09, 2015
During the lead up to my birthday, Julie insisted that she'd planned an incredible evening. She'd informed me that I should request the day off from my boss the following day, or at least permission to show up later than usual. She also told me to wear a suit.

This hype up started about two weeks before the day. Jack declared that it seemed impossible that it wouldn't be a let-down. Amazingly, it wasn't. Julie took Jack and I to The Magic Castle.

The Magic Castle is a renowned Hollywood institution. It's a private club, so in order to enter you must either be a member or the invited guest of a member. The club itself is actually called The Academy of Magical Arts, and the Magic Castle is its headquarters. It is a large former mansion in Hollywood which was converted over 50 years ago to serve for stage magicians the way the Friars club serves comedians. Inside of the Castle is a four star restaurant; five bars; a library; a museum; numerous stages; and an unknown number of secret passages and hidden secrets. Julie got us reservations at the club restaurant and tickets to the premier show of the night.

I've wanted to go to the Magic Castle ever since I heard of it. The concept merges fantasy with exclusivity and a classy dress code. It sounds awesome! What I didn't expect was the atmosphere generated by the gathering of so many illusionists. This didn't feel like dinner theater.  The performers weren't actors working for my benefit.  Most were just being themselves, showing off new tricks and trying to impress their friends over a stiff drink.  Within the walls of the Magic Castle, small handtricks were so wide-spread that after four hours I was inclined to just believe that maybe these people really had found loopholes in the laws of conservation of mass. I saw so many things disappear and reappear in inexplicable ways that my brain eventually just gave up trying to make sense of anything.  We were joined by three friends, one of whom secured our invitation from a friend of theirs. It was an incredible night that delivered on everything I could've hoped for from a birthday. I wouldn't have guessed that what I wanted most for my 29th birthday was a magic show, but apparently my tastes haven't changed as much in 20 years as I thought that they had. 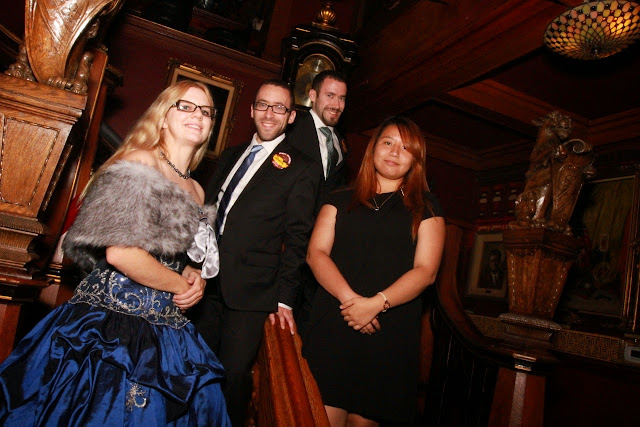 The only picture I can share was this one, taken by a photographer with special allowances.  Obviously, photography within the Castle is otherwise forbidden.
My Life