It's time to end Daylight Savings. Ourselves. 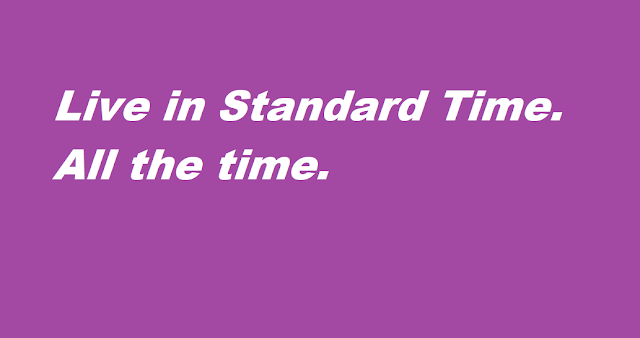 Daylight Savings Time is unpopular. So why do we still do it?

I'm not asking why we started DST, which is stupid but doesn't matter. I'm asking this: what is preventing us from stopping this unpopular practice?

I've met several people who thought that California had ended it by referendum with Prop 7 in 2018. It's fitting that a measure about DST is misunderstood by many Californians. But the literal explanation is that DST is imposed by the federal government, and Prop 7 merely demonstrated Californian's preferences as the first step of asking our federal government to free us from daylight savings.

This feels absurd though, doesn't it? The federal government? Why is congress in charge of what time Californians set their clocks to?

The answer is that just as a dollar is just piece of paper that gains its worth from our collective agreement, their authority exists so long as we believe it does.

We set our clocks forward because everyone else does, and if we don't then we'll log on to a meeting an hour after the rest of the participants. But if the majority doesn't want to then what would happen if everyone who didn't want to set their clocks forward simply didn't?

This would divide our society into two dueling times each jockeying for dominance. The earlier (and correct) time is Standard. This is what we live in through Thanksgiving, Christmas, New Years, and Valentine's Day. This is where we should stay. And just as we clarify a time by our region to those outside it, so too should we clarify our system for those who don't realize we have a choice.

For the first adoptees, it would admittedly be a symbolic gesture in many ways. Those of us who refused to change our clocks would still need to change the time our alarm goes off in order to show up to a shift "on time". But at least for interpersonal gatherings, there is nothing that stops us from inviting friends to go for a hike at "10 AM standard".

With time, though, I believe this act of defiance would increasingly reveal to others the voluntary nature of DST. I think more and more people would begin adding a post-it note to their microwave that says "Add +1 for DST" instead of Googling the operators manual. And perhaps sooner than later, even adherents to daylight savings would need to start clarifying which system they use to avoid confusion.  "You're open until 6? Daylight?"

I don't know how long this period of conflict would persist before reason won out. But it seems obvious to me that the main force maintaining daylight savings is simply inertia. Once the systems are forced into conflict -- and this would not be a conflict more painful than planning a phone call with family in another state -- I'm optimistic that social pressure will swing in the favor of those of us who've had enough of this absurdity, and that governments would have absolutely no incentive to stand in the way of popular will any longer.

I've set my phone's time back to Pacific Standard Time (PST) and added Pacific Daylight Time (PDT) to the home screen as a secondary clock. I've left the clocks in my home and car on their correct time, and used masking tape to clarify that the rest of LA believes the time is one hour later than what they say. And I'm going to begin specifying a time as "Daylight Time" in conversation and email.

Try it yourself. It's clear that the government is not equipped to lead change, but only to respond to popular movements that force change. Compared to general strikes and boycotts, this is perhaps the lowest cost collective movement ever proposed. I don't know if this is an existing movement, but if so I'd like to join it. If not, let's start it. Standard time all the time.