We are all metaphorically going back in time to March, so let's act like it.

Do you remember how the magnitude of the danger and disruption of COVID-19 dawned on you? If not, you're about to experience it again anew.

I remember in the first month wondering whether I should cancel an in-person meeting of a dozen people, or if the attendees would think I was being overreactive. My Mom asked whether it would be silly to cancel a cross-country plane trip. And then I saw this article by Tomas Pueyo on March 10: Coronavirus: Why You Must Act Now.

In the article, Pueyo warns readers of what came to pass: a wild-fire spread of death curtailed only by cutting off transmission rapidly. It was the first illustration I'd seen of what to expect, which was important because I had no frame of reference.

All of this context is building to this: when experts like Fauci say that the worst is yet to come, this is what they mean. Look at the trajectory of cases, and extrapolate the deaths out along the same curve. 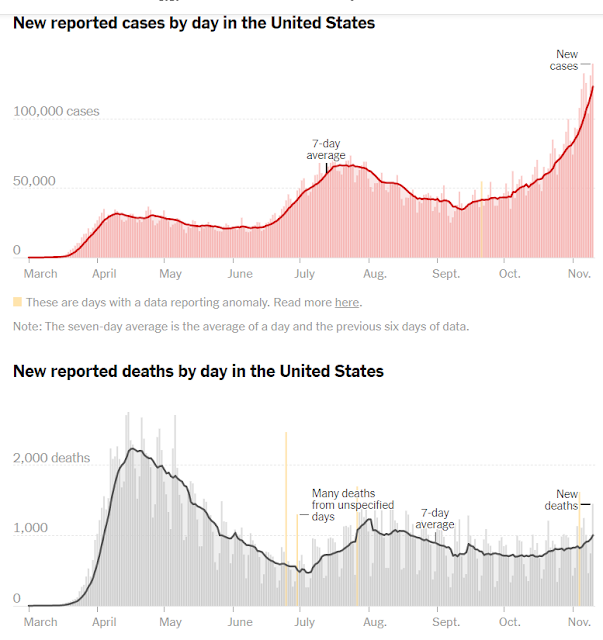 A glance is all it takes to see that we're heading like a rocket right through 2,000 deaths a day. And it gets much, much worse if you look at the actual projections. Because the last time, what occurred was a sharp peak in deaths. There's no guarantee of that though, particularly as the deaths become distributed nation-wide rather than in a one or several hotspots.

According to the current projections from the University of Washington, we should expect to hit 2,000 daily deaths in mid December, and the curve doesn't stop growing until mid January. DAILY deaths remain over 2,000 past the horizon of their model.

In other words, imagine the worst weeks of spring, and now imagine that those are MONTHS. Imagine 9/11 every 36 hours. Say these words out loud and feel the weight of them:

"Half a million dead."

Currently, I have begun expecting our third wave to resemble the first and second in their duration. I have hoped to travel -- with caution -- in early 2021. This is still possible, but without a major turnaround we are facing a return to lockdowns. I don't want to talk about what a return to lockdowns would do to people and society at large. Just understand that you're the guy from 12 Monkeys now, coming back in time to warn yourself. Don't panic, but act with the knowledge that right now YOU CANNOT OVERREACT.

2020 has been bad. Now, we are all time travelers jumping back seven months. Let's not repeat our mistakes.