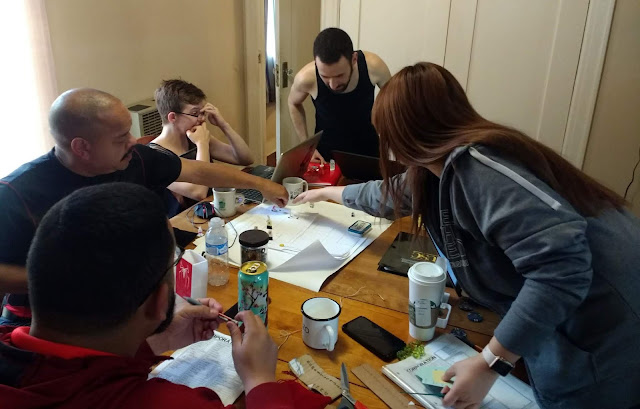 I've been running a table top game with friends for a while that takes place in a cyberpunk future, and recently had what felt like an exceptional session.

Jack was visiting from Austin for the weekend, and so members of our D&D group arranged to meet for an unusual Saturday session.  Normally we play short little weekday sessions from 8 - 10.  The mission was called "The Hidden Element", and began with the members of their squad fighting their way through the White House to rescue President Kennedy from Osama Bin Hitler when an urgent summons interrupted the VR training simulation they were conducting.  A rare scientific artifact had gone missing at a physics conference on a South Pacific island research center.

When they arrived at the Papua New Guinea Institute of Physical Sciences (PIPS) island, the director took half of the party to meet with UCLA physicist Lohan Botem while Hiro and Aston spoke to the on-site director of security.  Xeres, Perez, and their android KPCC learned that Butem brought the world's largest piece of the synthetic element Hassium.  It had been on display by appointment, and in the middle of such an examination it had disappeared.  It was a tennis ball sized sphere of metal that weighed 160 lbs and did literally nothing else.  Can it be weaponized they asked?  Not unless you drop it on your enemy's head.  There's no particular market, and no rival could admit to its theft, making the motivation behind its disappearance as perplexing as the heist itself.  How do you pocket a giant marble that weighs as much as a mini-fridge?

While Xeres, Perez, and KPCC began interviewing the Persian scientist who had been testing its heat capacity when it had vanished, Hiro and Aston started narrowing down suspects.  Who was leaving on the next train in 4 hours?  Who had examined the submarine bay that offered a back door below the research station?  Did anyone present have criminal associations?

It didn't take long for them to suss out that the Hassium node Yusef had been examining was a decoy designed to crumble into an almost unnoticeable powder.  And the person who saw it before Yusef was Dr. Botem's rival: a former colleague and romantic partner now mentoring and dating Botem's daughter at a rival university.  But before she even knew she was under suspicion she exonerated herself: the measurements she took of the node matched the decoy.  Like Yusef, it had been gone before she arrived.

Following the thread, KPCC began reviewing backups of the measurements taken by the previous visitors to the node.  Before Dr. Butem's rival studied it in the early afternoon, three students from the University of Auckland had been measuring the speed of acoustic waves through the Hassium in the morning.  Aston found them in the hall of miniaturized devices and began chatting them up.

Xeres questioned the director of the center, Festoon Alabaster, about what PIPS studied.  What kind of research did they do?  Would anyone have reason to hate them?  Dr. Alabaster showed him their primary claim to fame: a sustained miniature black hole.  What would happen if someone shoved a giant ball of Hassium into it, Xeres inquired?  It'd be a disaster.  The resulting burst of energy would destroy most of the facility and their research.  But that would be needlessly extravagant, explained Alabaster.  It'd be far more practical to just sneak in a bomb.

The attendees moved from browsing posters and exhibits on to dinner.  Soon, the keynote speaker would present, then the culprit would likely depart on the evening train afterwards.  But pieces were falling rapidly into place.

Careful analysis revealed that the data captured by the Auckland students -- Gretchen, Milton, and Molly -- had been fabricated.  Their instruments had been mere decoys designed to covertly swap the real node with the decoy.  And they'd taken an instrument from the visitors lab space where Butem had been set up down to the primary lab where the black hole resided at 10 AM, just before returning to their rooms.  Under scrutiny, their online identities were starting to show suspicious cracks.

With less than thirty minutes before the next high-speed train arrived and departed the island, the squad still hadn't located the Hassium node, but they decided it was time to close in on their suspects.  KPCC searched their room and found a message planning a rendezvous with a submarine only 15 minutes hence.  Leaving Gretchen's suite, KPCC ran into Gretchen herself.  Gretchen dropped cover in an attempt to silence KPCC and the two fought to a standstill until Xeres arrived to knock Gretchen out.  At the same time, Hiro and Perez each followed Molly and Milton as they boarded separate elevators.  Molly went down while Milton went up.  On Hiro's order, KPCC stopped both and cut the lights.  But in the midst of Hiro's pitch black fight with Molly, Milton escaped Perez and joined Molly in her fight with Hiro.

Eight stories above, Xeres had left KPCC and the unconscious Gretchen and was descending an elevator shaft on his compact repeller in a race to Hiro's aid.  He instructed KPCC to bring Hiro's elevator to him, but at the same time, Molly and Milton had decided to execute a retreat and were attempting to drop Hiro's elevator as they left.  They did, but not before KPCC accelerated it upward, sending it on an uncontrolled ballistic arc straight at Xeres.  He ascended at max speed and it reached the top of its parabola with him momentarily standing on it.  Hiro scrambled out the top just as it reached its peak, and as the elevator began falling, Hiro shot out a grapnel and arrested his fall.

Now in a race to catch Milton and Molly, KPCC, and Perez rendezvoused in the submarine bay, intending to block their escape route.  Hiro searched for them on the spa level.  And Xeres headed to the main lab.

As the speaker delivered his presentation on the black hole in the grand lecture hall on ground level, Xeres entered the cavernous lab three stories below to find Milton and Molly, now dressed in black tactical gear, standing above the black hole hopper.  Molly activated a handheld trigger and a message broadcast throughout the base, announcing that they'd been pwned by Chaos Gang.  They were a team of students studying corporate espionage from Papua New Guinea Institute's rival, New South Wales University, and they were out to make a name for themselves.

Molly warned Xeres that if either her hand or Milton's left their dead man's switch, the Hassium node would drop into the black hole, destabilizing it and releasing a catastrophic explosion.  Lightning fast, Xeres grabbed Molly's hand and held it closed over the switch and told her to surrender.  When she demanded he unhand her, he severed her hand at the wrist with a slash of his sword.

For a second time, Milton and Molly fled, this time a hand lighter and for the submarine bay.  But as they exited the elevator, Milton tripped on a tripwire set by Hiro, releasing the dead man's switch, which released the Hassium node.

Xeres sighed, and made peace with death as he watched the Hassium cross the microscopic black hole's event horizon and shrink out of visible existence.  Rather than explode instantly as he expected, though, Xeres saw a display begin alarming that the black hole had now become unstable, and would collapse violently in approximately 8 minutes unless stabilized with a massive influx of gamma radiation.  KPCC did a search of potential radiation sources that could fit through the hopper.  There was a miniature nuke locked up in the hall of miniaturized devices.  Xeres raced there and hacked the safe.  How much time did he have?  Would it be safer to just get himself and everyone else as far from the center of the island as possible?  Fuck, it, he figured.  He'd already made peace with death anyway.  He raced back and threw it in the hopper as the monitors reported that stability metrics were now below detection.  The Altoids tin in which the nuke had been assembled struck the distorted air in the center of the chamber, a hiccup of light and sound appeared and vanished faster than could be confidently seen.  Immediately, the monitors announced a restoration of balance in the radiation absorbers on which the apparatus relied.

They'd lost the Hassium, but caught the culprits and saved the center and its research.  Molly, Milton, and Gretchen were transported on the next train to the Papua New Guinea mainland to stand trial.  And the director and his colleagues heaved sighs of relief and saw to the conclusion of an otherwise quiet conference.

This was a thrill to watch and I can't wait to relive it listening to the recording later.