May 01, 2017
Three weeks ago, Julie and I went camping.  Twice each year, our friend Ann organizes a game in the forest called the Fox Hunt.  It's a bit like hide-and-seek.  Foxes are given a twenty minute head start to go hide in the woods, after which the hunters pursue them.  The foxes attempt to make it back to the base they left from without being tagged, however their trails are marked with surveying flags.


The result is surprisingly tense.  Both sides have huge advantages and disadvantages.  The foxes simply have to go into the woods and come back without running right into someone, which seems easy, however the woods we use lie in a valley carved by a stream, which funnels people back towards the middle and makes it hard to circle wide.  Eventually, you've got to come down from the sides to come back.  The hunters, meanwhile, just need to follow a brightly lit trail.  In practice, though, it isn't hard to make the flags deceive.  Foxes lay false trails into dead ends, and when you finally determine that the trail has terminated, you then need to retrace it looking for the fork.  It doesn't take much to slow a pursuing hunter down and then make a move back to base.

I've been doing this each April and each October for about three years or so.  It's a great event.  Julie and I arrive the night before to camp out, and after the game is over, we all hold a big potluck picnic.  It's become an event by which I track the year.  This year was an especially momentous occasion. 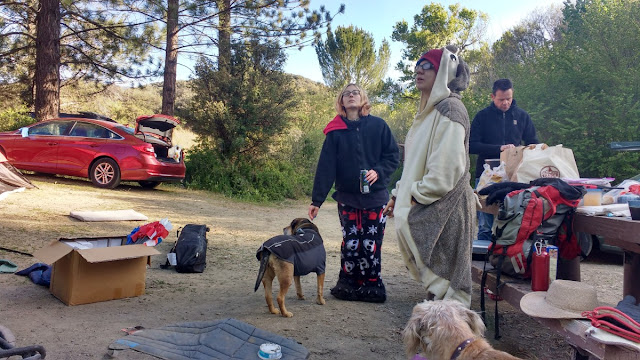 Julie broke her leg in a motorcycle accident on April 13 of 2016.  She was in the hospital for two weeks, and when she got out she insisted on driving up to Ojai despite the fact that just getting out of bed was hard.  It was worth it, though.  She got so much out of the fresh air and our friends' reactions.  When they saw Julie out and about despite the leg they all were overjoyed.

A year later, Julie attended on her own two feet.  Not only that, but she caught a fox.  I was with the fox, laying flags.  Typically, foxes have a handler who lays flags so the fox can focus on strategy and isn't relied upon to make a decision regarding how far a distance between flags is allowed (they must be visible from one to the next).  This meant that I was there when Julie emerged to surprise us far out in the brush.  This meant following a trail that cut through brambles, army crawled under sage, and descended from treacherous heights.  I'd assumed that she'd stay near the stream because of her leg.  And yet, she'd tracked us with expert precision along our punishing route, anticipated our heading, and stealthily gotten the drop on us.  I couldn't be more impressed.

It's been a good year.  I hope May is as much fun as April was.