This is the third time we've dressed up (cosplayed, it's called) for a movie.  My mom asked, "Is that something people do?"  Kinda, Mom.  Kinda.  People do it occasionally, although for a movie this size it's not quite as common.  Still, the reaction is fantastic.  People take pictures with you and geek out.  It's a lot of fun.  It's better with more people, and this time we rolled deep: eleven people were in our group, five in costume.

This costume was a real milestone for me.  I've always enjoyed making costumes for Halloween and such.  Usually, I've relied on resourcefulness and lucky finds at Goodwill.  Often, the key is distilling a character's look into a few key items/colors/shapes/icons etc to make it clear who you are without needing to copy their image completely.  Last year we went to the second Avenger's movie in costume as well, and you can see that each of us looks pretty good, even though most of our costumes are actually pretty simple. 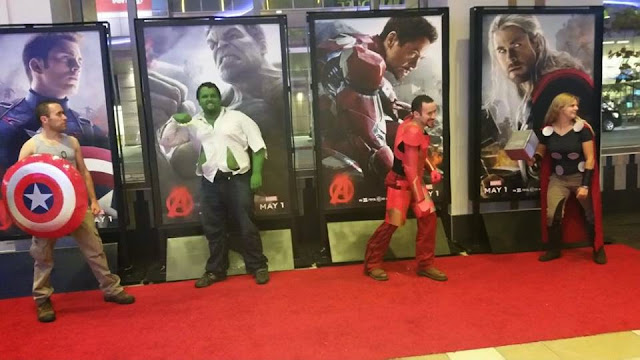 I was Captain America that time too, although I was honestly not thrilled to be.  I didn't have anything close to his elaborate uniform, so I put all my effort into making a shield, which was enough to let people know who I was supposed to be and had the added benefit of providing me with something to hide behind.  Julie insisted that a sleeveless undershirt was the best way to communicate the character, but it was a little daunting, honestly, to try and pass myself off as the buffest dude ever with my arms exposed.

When we decided to do it again I considered the costume from a different angle.  Last Halloween I went as Jafar for the group contest at work.  Goodwill doesn't sell a lot of Persian-styled silk villain robes, so I got all the cloth from Jo-Ann Fabrics and hot glued it together.  It worked great, and I loved not having to hope to strike gold.  I wondered if I could do something similar this time.  I got the right cloth and started cutting and gluing.  I borrowed Jack's roommate's sewing machine in case I needed to sew a bit.  Soon I realized that the sewing machine wasn't too hard, and I ended up sewing the whole damn thing.  Not to brag, but I think it came out pretty fuckin' incredible. 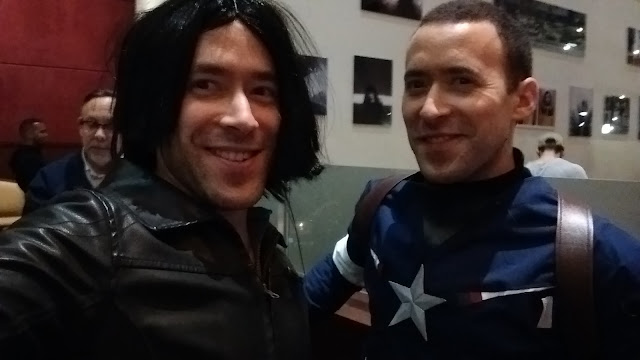 Honestly, I don't think any of the pictures quite do it justice. 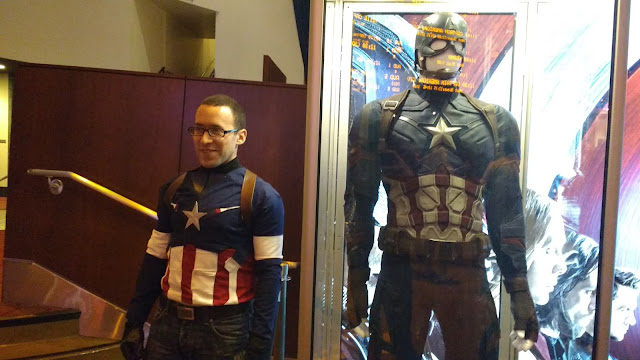 Showing it off next to the actual costume worn in the movie doesn't really do it any favors, but still cool.  Also, that costume is on a pedestal.  I'm pretty sure that Chris Evans is only 12 or 14 inches taller than me in real life. 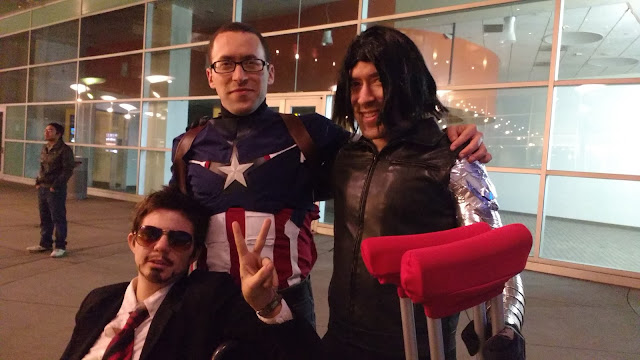 The best part is always hanging out with friends.

I thought the movie was great.  We got to take pictures next to the actual costumes from the movie.  Our whole group looked pretty solid, even if we didn't get a great group shot.  Jack made him arm look like Bucky Barnes' robotic prosthetic and it looked sweet.  Julie's costume was subtle, but she wore it well.

This was the day before I turned 30, and kicked off a rolling celebration that carried all the way through to the next weekend.
Comics Cosplay Reviews