February 03, 2016
The other weekend my neighbor Elizabeth invited me to a regional conference held by the Citizen's Climate Lobby (CCL).  I mentioned the CCL in an earlier post.  It's a climate action group which lobbies individual representatives to support a particular strategy for phasing out the production of carbon dioxide (CO2), which has been slowly raising the temperature of our planet over the last two hundred years.
The conference really impressed me because it offered an uncommonly realistic strategy for addressing climate change.

If climate change action is something to which you don't pay much attention, you can be forgiven on the grounds that it's a depressing topic with very little new news.  It periodically appears in the news when the Intergovernmental Panel on Climate Change (IPCC) releases an update on how much CO2 has been released and what effects we expect to occur on what time frame, but other than that it just marches along quietly. Occasionally but rarely a positive story makes the news, as was the case in December when the Paris climate conference of world leaders agreed to the most sincere climate action plan yet laid out.

This news is tempered, though -- at least for me -- by the persistent concern that almost every approach to addressing climate change seems to fall victim to the same problem as the famous Underpants Gnome Business Plan (UGBP). 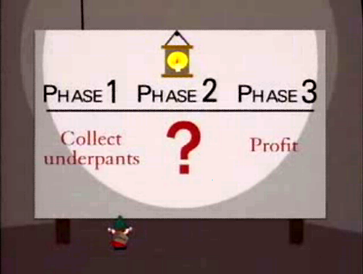 Don't get me wrong: driving a hybrid helps. Sharing an article on Facebook helps.  Agreeing to a non-binding international accord helps.  But none of these actually identify the specific set of steps which will take us from our present situation (Phase 1) to an environmentally sustainable future (Phase 3). Which brings me back to the CCL conference.

The CCL has accomplished something significant.  It has figured out what Phase 2 is.  In fact, I will go so far as to say that I am convinced that the CCL plan not only can be successful, it will be successful.  I say this because action on climate change is absolutely inevitable due to the gradual increase in extreme weather events and the slow die-off of climate change deniers.  The question is not whether we will do something but how long we will let the problem get worse before we are absolutely forced to do something.  When action occurs, I think that the CCL strategy is far and away the most likely approach to gain acceptance.  So good news, America:  we solved climate change.

By which I mean that we finally know how to solve it.  We still have to actually carry out this plan.  As soon as possible, really.  Like, yesterday, preferably.

So what the hell is this big plan I'm so fond of?  It's two parts.  One is called "Fee and Dividend" (F&D) and the other is called "Achingly Slow Diplomacy Conducted By Intelligent Experts" (ASDCBIE).  Each addresses the two big hurdles towards a solution.

The first hurdle is identifying a way to limit the emission of CO2 and force our energy industry to eventually phase out coal and oil production.  That is where nearly all of that CO2 comes from, by the way.  Oil is liquid carbon.  Coal is solid carbon.  When we burn them we release the gaseous carbon that fills up our atmosphere.  We can't stop using them by royal decree because this is America, damnit. The only king we bow before is Capitalism (In all seriousness, though, I'm actually a pretty big fan of capitalism).  What we need to do is make coal and oil production cost more than it does so that renewable energy becomes a more profitable practice than drilling for oil.  When that happens, Industrialists will no longer need to choose between protecting the planet or making money: they will simply have to chotose between protecting the planet while making money or destroying the planet and losing money.  Fee and Dividend accomplishes this by simply charging companies that extract oil and coal or other carbon emitting processes in proportion to the carbon that they are ultimately introducing into the atmosphere.  They're still allowed to do it as much as they like.  Just now, their profit consists of whatever money they make selling gas minus the cost of paying people to drill for oil, minus the cost of transporting the oil to a refinery, minus the cost of refining oil, minus the cost of transporting the refined gas, minus the cost of producing a polutant that is slowly flooding Florida.  That's the fee: it's a little surcharge you owe for flooding Disneyworld and Miami.

The second hurdle is that actually instituting a fee runs headlong into human opposition.  This is because raising the cost of gas will raise the cost that average Americans pay per gallon of gas.  As someone who owns a car, I don't like when the cost of gas goes up either.  Furthermore, conservatives hate it whenever  the government collects money because they can use this money to hire another bureaucrat or buy more stationary for the White house.  These two problems can be solved by just taking all that collected fee money, splitting it up among every American and writing them a check.  In other words, it is 'Revenue Neutral'.  For most people, they'll receive more money in this check than they will lose do to increased gas prices.  And guess what?  Many smart Americans will buy smaller cars or ride bikes so that they don't need to spend as much on gas and then use that money to buy beer, American flags, or whatever else Americans buy when the government gives them back money.  Fewer cars on the road, more money in your pocket, and the government is no more or less in-your-business than it was before.

Unfortunately, there is still the matter or attitudes.  There are people who don't like the idea of doing something about climate change because it would mean admitting  that they were wrong.  This is where Achingly Slow Diplomacy Conducted By Intelligent Experts (ASDCBIE) is applied.  The CCL employs a very small but effective staff and a very large and effective volunteer corp which meets with legislators and proposes Fee and Dividend in whatever way they personally are most effectively convinced.  This can be by conducting studies within a district or getting endorsements from prominent business leaders.  This is the same proven method used by the NRA and the Agriculture lobby to steer congress, and it can work for us too.  The key is understand what drives each legislator and press on that button.  This is instead of marching with signs or yelling on the radio which has notoriously little effect on congress at all.

So that's why I was so excited by the CCL conference.  A series of experts outlined in far more detail than I can an actual Phase 2.  Phase 2 is to send an army of savvy negotiators to meet with their congressperson and present Fee and Dividend to them using the special language that congresspersons obey which was previously only available to the fabulously rich.  Join in and help today at citizensclimatelobby.org.