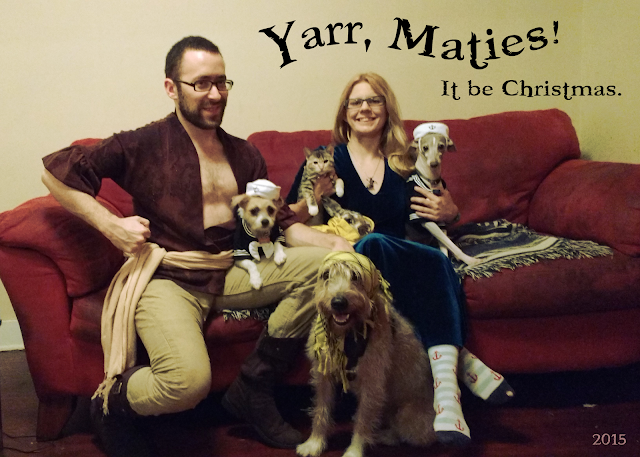 CHRISTMAS!! (and Hannukah too)

I didn't grow up with Christmas, but I've always loved Hannukah.  When Julie moved in three years ago she introduced me to Christmas, which I rolled into Hannukah and New Years to fully transform December into one massive, blurred-together holiday.  I've never felt a conflict: as far as I'm concerned, Christmas is a secular holiday for me.  Jesus doesn't appear in most Christmas traditions, and happens to have been born in April.  For what it's worth, Hannukah isn't really a religious holiday either.  A few years ago I was making an exchange at Banana Republic in Pittsburgh and the clerk actually apologized for wishing me a Merry Christmas.  I told her that Hannukah sensitivity was thoughtful, but seemed unnecessary since it's not an actual religious holiday.  The mother in line behind me objected.  I wish I could say I kept my mouth shut, but the truth is I politely pointed out that God does not appear in the Hannukah story at all, and that the holiday simply celebrates a well executed historical guerrilla resistance.  Anyway, the point is, CHRISTMAS.  And that I'm sort of a confrontational dick.  But more importantly, CHRISTMAS.  It's fun as hell and I don't need to apologize for that.

Julie and I both take a lot of pride in gifting.  We have different attitudes, but both are great.  Julie likes to maximize the spectacle, and often can overwhelm recipients with the size and number of her gifts.  My personal goal is to gift a few key items that will deliver a concentrated impact.  Lets see what was exchanged.


Julie got me a bunch of fashionable accessories.  I decided to start dressing nicely about two months ago, and I asked Julie to help out.  A big part of this is socks.  Until now, I've only worn the same style of identical athletic socks.  Now, I've started wearing socks which actually match my pants and shoes.  In addition, my friend Chaka suggested I wear a bow tie last February after I asked him for some advice when dressing for a nice event.  He went so far as to give me one of his bow ties with the advice that I get a few and start wearing them regularly.  He was right, although having one bow tie feels a little like wearing a costume and I've only been able to match my socks one or two days each week.  Well no more!  Julie got me a bunch of socks and bowties, as well as some matching pocket squares. 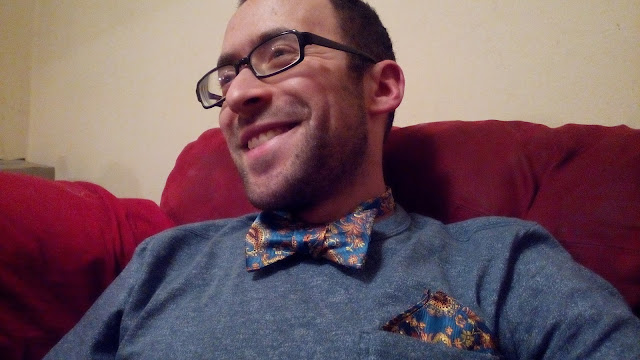 One of six bow ties Julie gave me, this one for Hannukah.  Obviously, I don't wear them around with crew neck shirts, but I wanted to try it on, and this is what I was wearing. 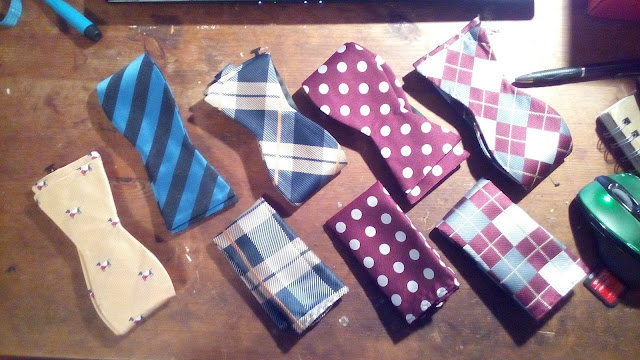 Here are the rest.  I'm super excited to try and dress like a classy guy more often.

Julie got me an assortment of socks, including the following insanely nerdy DNA socks.  The best part is that Julie and I actually had a conversation a few months ago about DNA socks.  Julie encouraged me to submit an entry to the annual design contest put on by her favorite brand (maker of the Foxsocks below).  I tried to make one with DNA and went on a rant about how much it bothers me that people constantly depict DNA using any silly vaguely twisty ladder.  I hate it most of all when people draw what appear to be literal representations of DNA that aren't shaped like DNA at all.  When I actually write that out I'm embarrassed by how pretentious it sounds, but it's necessary to show off how incredible it is that Julie founds socks that depict DNA more realistically than even I need. 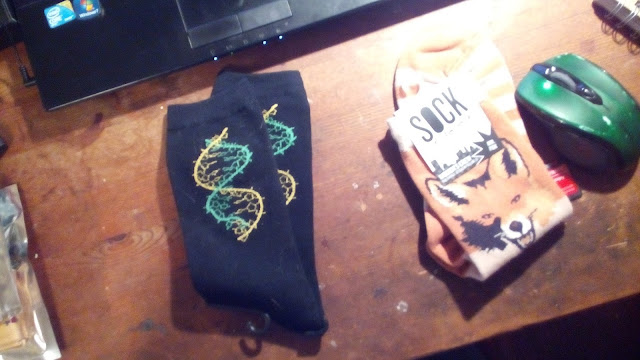 My friend Jeff got myself, Julie, and Jack, each a t-shirt.  Here is mine.  Thanks Jeff! 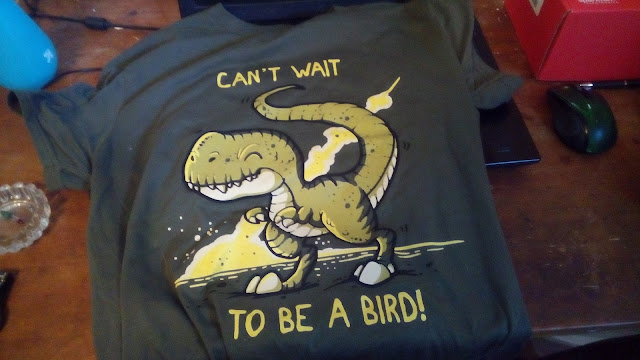 Julie also got me a rack for our mugs.  I can't effectively describe how much this delights me.  I've openly lamented having too many mugs for the cupboard, and now we can store them better and keep them out where guests can see our awesome mugs.  So I'm delighted.

Jack got me a whole bunch of parts for my secret project.  I'm almost ready to start talking about that, but I still don't want to until I've actually done something.  Anyway, he bought me way more of the parts then I expected him to.  It looks amazing. 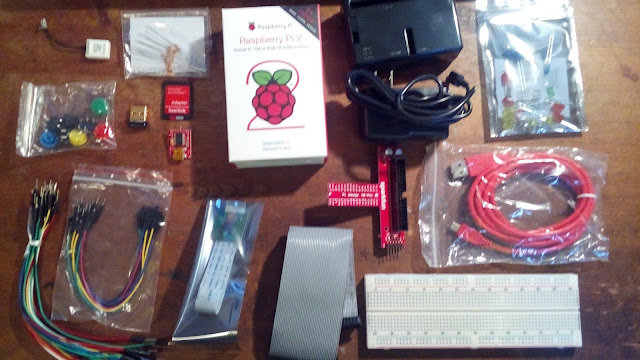 The best part of Christmas, though, truly is giving.  Check out the awesome stuff I got for the people I love.

The international hit board game Pandemic! 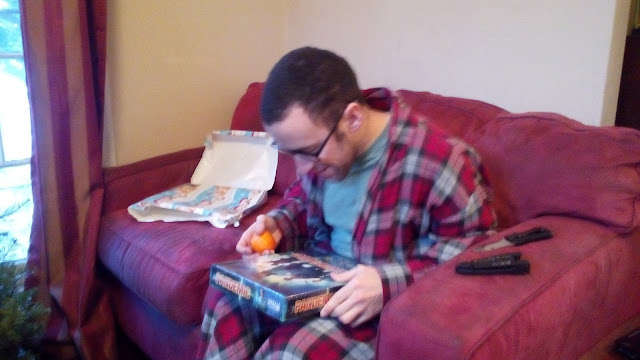 The in-game merit badges earned by the hero of Julie's favorite game, "Psychonauts".  She actually made some herself many years ago that wore out, back when such things were only home-made.  Now that the game is a cult classic, you can buy these from the makers, who happen to be crowdsourcing a long awaited sequel.  Pre-order your copy here. 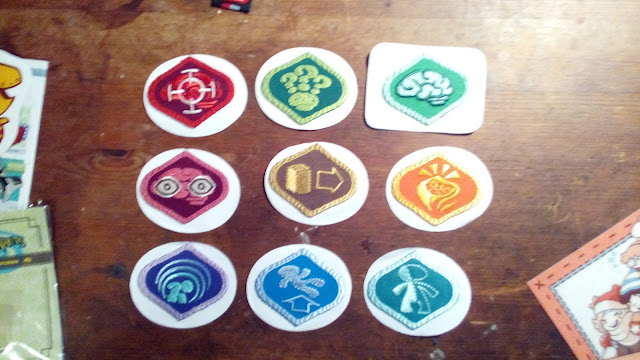 This goofy hat is from the top-of-the-line brand that invented this style of hat: Spirit Hoods.  Though normally $100+, Julie actually noticed this at Avalon while we were in Pittsburgh, so I bought it when she wasn't looking for $30.  It's in new condition and she looks great in it. 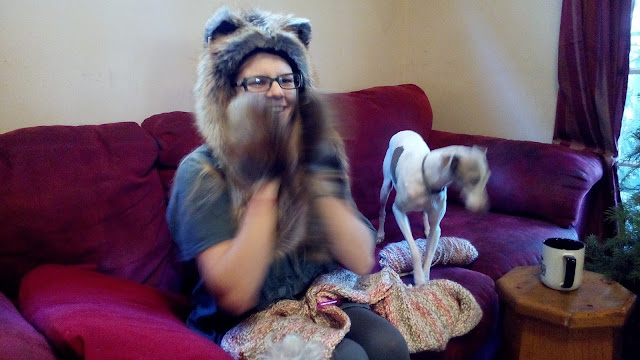 The last gift which was also for Julie was the one I was most excited to give.  It's a copy of a very unusual book: "Snouters: Form and Life of the Rhinogrades".  It is a thorough scientific examination of an order of mammals called the Rhinogrades.  The thing is, it's all incredibly convincing fiction.  It's a kind of hoax.  The author invented a dozen or so extravagant animals and their ecosystem, and provided everything from anatomical drawings to descriptions of mating habits.  It's a hard-to-appreciate work of art that a mentor once shared with me.  I've wanted to share with Julie for a long time. 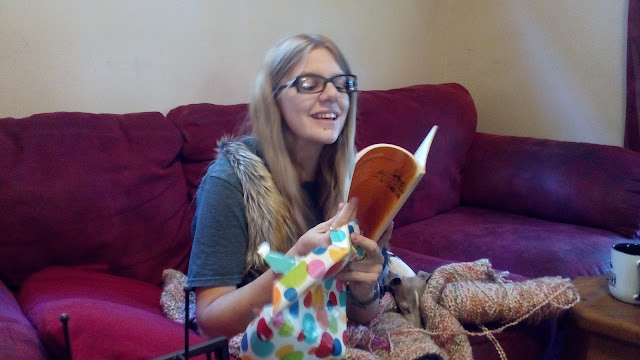 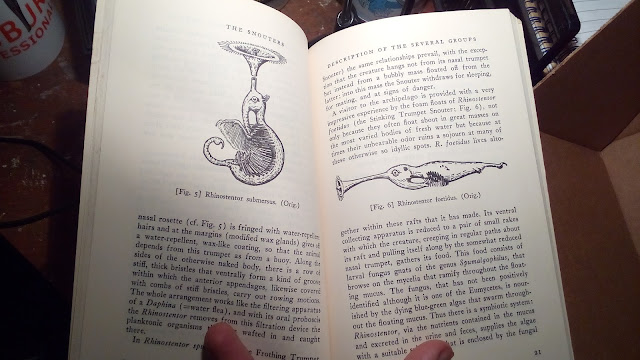 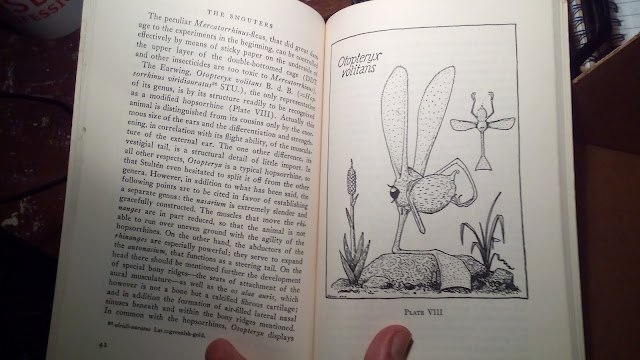 Another page of this bizarre book

So that's it.  I know my delight at giving and at receiving can't be properly captured, but I had a great Holiday as far as gift exchanges went.  I'm looking forward to the final leg of the holiday season -- New Years -- followed by the beginning of a brand new year. 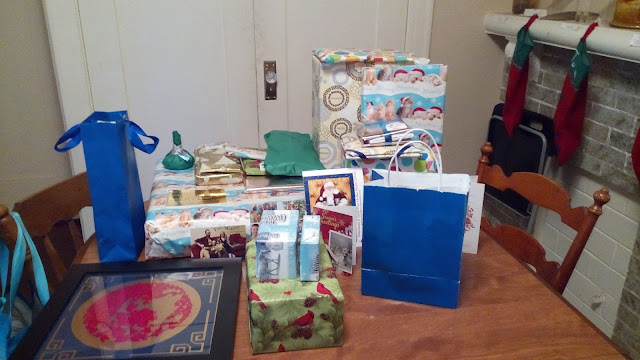 All the gifts, before unwrapping