December 18, 2017
Last weekend, we went to a truly amazing party.  In celebration of the solstice, everyone was asked to come in the guise of one of the ancient deities.  Upon arriving, we were each given three coins labeled with the powers conferred by our characters, and told that we could not use the powers, but were able to trade them and use the ones we received.  We were also each given personalized win conditions.  I attended as Loki, the god of mischief.  Tony attended as the mighty Thor.  Jack came as Heimdall, the watchman.  And we had a blast.  The Egyptian gods, Greek gods, and Aztec gods were present, but the Norse gods clearly owned the night.

At the party, I arrived in the guise of Sif, Thor's wife and goddess of the Earth.  Heimdall was given instructions to reveal me, so I spent the beginning of the party trying to evade discovery.  Eventually, after several thwarted attempts to uncover me, Odin and the rest of the Norse gods used some in-game spell to force me to appear.  This attracted everyone's attention to follow the drama, which afforded me the opportunity to gift one of my coins -- labeled "Chaos" -- to a friend, who immediately used it to force everyone within ten feet to randomly exchange the coins they'd worked so hard to trade and acquired.  Tony, Jack, and I all were shocked at how instantly the room was thrown into genuine pandemonium.

Over the course of the evening, I changed wigs and masks several times, teased the other gods and stirred up fun.  I can honestly say I've never received so much positive attention at a party.  Loki is a hilariously fun character to play.  Tony made a super-fun Thor too.  In fact, all the folks who'd come as Norse characters -- Odin, Freyr, Sunna, Mani -- seemed to be the most lively attendees.  The entire Norse lineup owned the night. 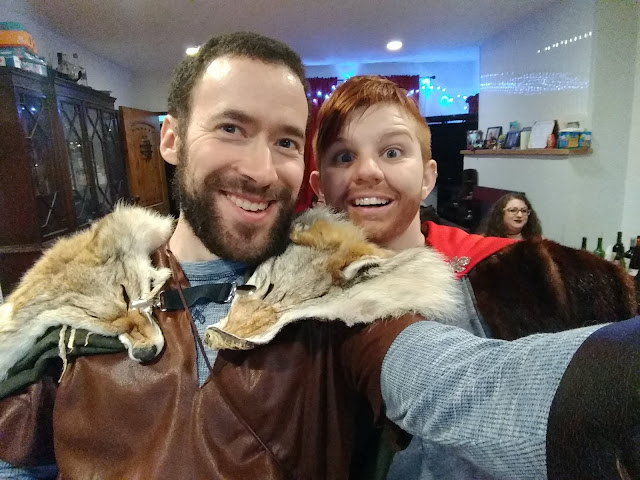