May 06, 2017
Tomorrow is my 31st birthday, and I'm blessed with incredible health.  Which makes this a fitting time to make a statement that I feel needs to be said about my mortality.  I believe that it is most likely that when I die, it will be due to cancer.  And furthermore, I don't consider this a bad thing.

I went to a doctor for a general checkup last week, and asked to get my genome screened or sequenced in order to assess what hereditary diseases I'm at elevated risk for.  The doctor told me I was about five years early and that it wasn't an affordable or covered service yet, so I guess I'll just have to wait.  When I mentioned that I was fairly confident I'd die of cancer, she was taken aback.  "Why would you say that?" she asked.  Her tone was respectfully professional but without an effort to hide her disapproval that I would prognosticate my own cause of death.  Did she think I was being disrespectful to people with cancer?  Did she think I was being offensive in a general social sense by appearing to mock death?  I'm not entirely sure, but my Mom once gave me a similar reaction when I said the same thing a few years ago, and I recall Julie afterwards chastising me for what she thought was a tasteless thing to say to my mother.  I could imagine that part of the taboo might be that I look like a smug, over-confident prick by announcing that I believe I know what is considered one of life's great unknowables.

I don't understand why my relationship with my mortality reflects badly on me, but I know that it does and I know that not knowing why it does reflects badly on me as well.  If anyone wants to respectfully explain it, I'll listen and I'll probably act on your advice.  But for the record, this isn't a glib, thoughtless statement.

In the US in 2010, roughly 6 million of the 24 million people who died lost their lives to cancer.  Which means that just by sheer chance, I have roughly a 1 in 4 chance of dying of cancer, if I were to have expired in 2010.  So would you.

Additionally, my father died of cancer several years ago.  His sister has fought cancer successfully.  Their mother died of cancer when I was young.  So after he died, in the process of reflecting, it occurred to me: I'm a machine built on the same production line as those people.  And apparently that's a defect that happens to have been seen in that production line.

This by no means rules out the possibility of other deaths.  But consider the next likely causes.

Right alongside cancer is heart disease.  So if I didn't think further, I could make a similar prediction about the likelihood that when I go, it will be due to heart failure.  But diseases aren't random.  My family tree happens to be thin in suffers of heart disease.  Furthermore, risk of heart disease -- like cancer -- is the result of both genetics and lifestyle.  Consider this figure from the American Health Economy: 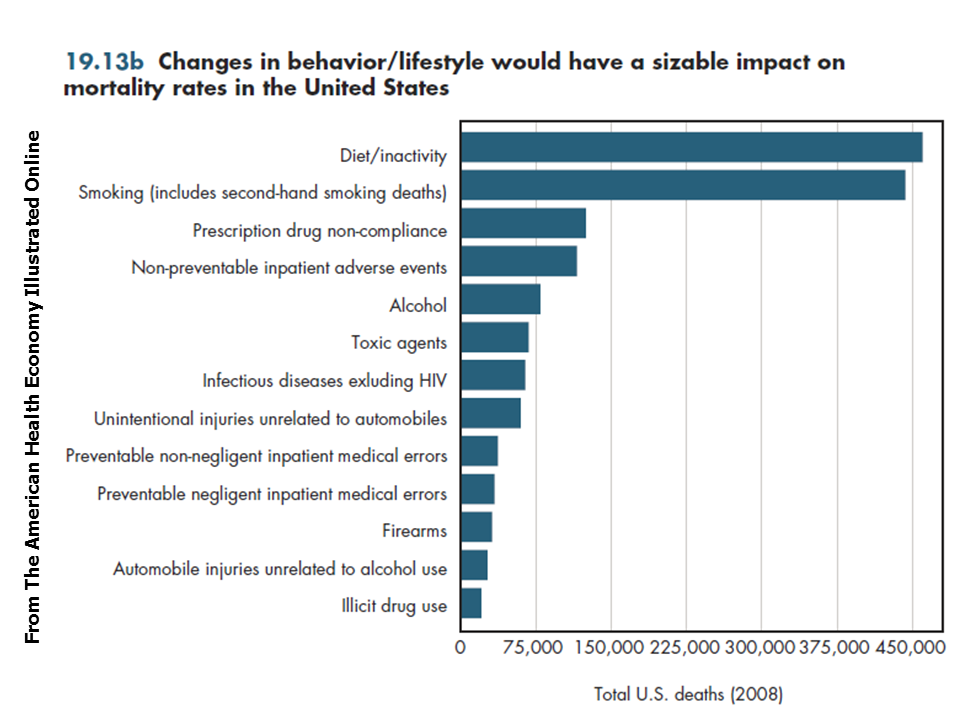 Heart disease is so prevalent because many people who lived through the last few decades ate poorly, didn't exercise, and smoked.  I've fallen out of the habit of flossing, but I take pretty good care of my body.  At the same time, my career exposes me to more chemicals and radiation sources than most people.  So we start with 25% and then bump it up for the greater likelihood relative to the next likely cause.  We can repeat this process with Lower Respiratory Diseases, just because I don't happen to work in mining or construction and my family has had good fortune with lung health.  Stroke and Alzheimer's are pretty much unchanged.  They're notoriously unpredictable, so I'm at as much a chance as anyone.  For unintentional injury I'm slightly reduced in probability as well.  I'm active, but I wear a helmet and generally exercise caution.  Most importantly, I have prompt access to medical care, which is the biggest factor in predicting mortality of a car crash or a fall.

And then we get to Diabetes.  Which introduces an important new wrinkle.  Now, I'm not going to die of Diabetes, because the genetic version usually manifests in childhood and I don't consume enough sugar to get the dietary version.  But more importantly, that is a disease we're on our way to licking.  I'm not sure we'll ever cure it completely, but like HIV, diabetes is a disease we can treat well enough to let someone live out a natural lifespan.  Justice of the Supreme Court Sonya Sotomayor was told she would probably not make it to 40 when she was initially diagnosed with diabetes at seven.  She is now 58, and is expected to rule on the bench for years to come.  Based on long term projections, even insulin shots will likely become obsolete in my lifetime, as procedures to replace cells like those missing in diabetics appear entirely achievable.

Although not all the causes of death listed above will see as much progress as diabetes, it reminds us that we must consider the direction of medicine in order to predict a similar chart for the middle of our new century.  All of these will likely see some improvement.  It's possible some will see a spike due to a modern health risk we aren't aware of right now.  Ultimately, though, as I look at the state of medical research in 2017 and what we know about etiology of disease, I think neurological degeneration, cancer, and heart disease are things that we delay, but may not stave off forever.  Once people don't die of infection or war, these are the things that get you if you survive everything else.  Of these three, my closest pursuer is likely cancer.  Nothing is indestructible, and our bodies like all things will eventually wear out.  But in predicting that I will die of cancer, I am predicting that I will die of it well after 80, perhaps after dealing with it for several active decades.

I consider myself at reduced risk for most of the common causes of death.  I consider myself at elevated risk for one of the leading causes of death.  And I envision a future in which the disease I am most susceptible to is one we can manage very effectively.  So when I say that I believe I am most likely going to die of cancer, it is because I plan my life with the expectation that I'm going to live it very fucking well.  This is how I find comfort with my mortality.  This makes me feel more prepared and in control in the face of something I know I am ultimately powerless against.  One day I will pass away from this Earth.  Hopefully, if I am successful in my endeavors, I will do so contended, proud, and utterly stuffed from the feast of life.  And when this day comes, I think the specific cause listed on the medical report will, as a matter of trivia, be cancer.

And I'm fine with that.
Opinions Science & Technology