February 08, 2016
Last week I saw a cool gif of the earth from space. It's a time-lapse of one day in incredible resolution.  It was taken by the Himawari-8 satellite on August 5, 2015.

If you look in the middle you can see a swirl of clouds. I wondered: how special are those clouds?  Are we looking at a big storm? Regular cloud patterns over the Pacific? Did it have a name?  Fortunately, I have a meteorologist friend, Brad Schaaf.

Brad lives in Medford, OR, where he works for the National Weather Service traking weather and dealing with crazy harassing phone calls from conspiracy theorists.  Apparently the only people who care about weather and the skies as much as meteorologists are lunatics.  Here is Brad's response.

I got your message and did a bit of investigating into the storm. You are quite correct that it is quite a remarkable system, and that it is named. (Fun fact: only systems like this are named. The winter storm names you hear from the weather channel are bs. The World Meteorological Organization only supports naming of tropical cyclones at this time. This means that blizzard that hit the east coast was unnamed despite it doing extensive damage since it was a mid-latitude cold core system and not a warm-core tropical system. (I get that's probably tmi, but it's fun to have a captive audience; and it's a detail that is important since you asked if the system was named or if it was something ordinary.)

This was Typhoon Soudelor (if it occurred in the Atlantic or East Pacific, you'd call it a hurricane). This storm began on July 29th. It underwent rapid intensification on August 2 to become a category 5 super typhoon on the 3rd. It had 10-minute sustained winds of 130 mph with 1-minute sustained to 180 mph. By the time the gif you showed me occurred in the 5th, it started to weaken.

This system made landfall over a few islands before hitting Taiwan on the 7th. It did extensive damage (3.2 billion dollars) and killed 38 people.  It was a pretty legitimate storm. More information can be found here: https://en.m.wikipedia.org/wiki/Typhoon_Soudelor_(2015)

The pictures attached are from the article, and depict the track and strength of the system. And the second one is the typhoon at peak intensity on the 4th.  If you have any additional questions, please feel free to ask! 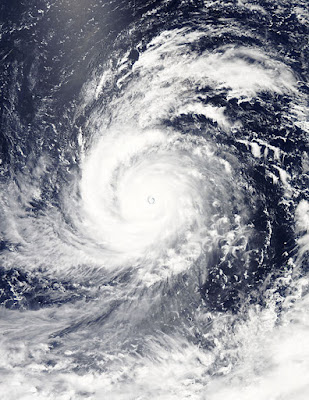 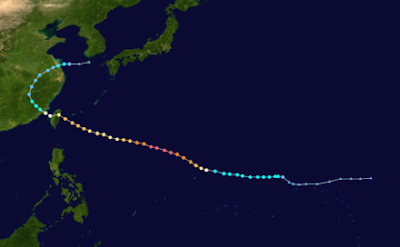 In addition to being cool, I think this email is illustrative of the driving force behind scientific illiteracy.  I am privileged that I can consult an expert when I have a question, and even though I don't know much about storms, I know that there are people who do.  If you ever wonder how someone could consider climate change a hoax, remember that many people know the same number of scientists, billionaires, and leprechauns.  Many people assume 'scientists' are just people who look up at the sky and make assumptions rather experts with advanced tools and training.  I think it's amazing that answers to these kinds of questions are available. I hope that one day everyone knows how to get in touch with the efforts that they need.
Opinions Science & Technology